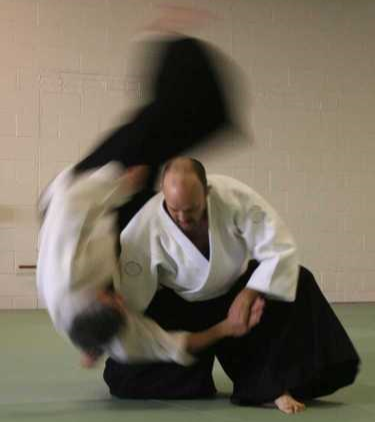 Tim Vazquez is currently ranked as 5th Dan (5th degree black belt) with certification through Aikido World Headquarters (Aikido Hombu Dojo, Tokyo), the Aikido Centers Alliance, and is a member of Aikido Centers, Inc. He has been the Chief Instructor of Aikido Center Of Manasquan for over 20 years. He has traveled extensively internationally and throughout the U.S. to study with a great many of Master Morihei Ueshiba's (known to all Aikidoka as "O'Sensei") original students. He has also trained at a wide variety of aikido dojos from New York Aikikai (headquarters of the United States Aikido Federation) to all the Aikido dojo's throughout the state of N.J. He has trained with a great many direct students of O'Sensei who are now the world's most notable Aikido teachers such as Y. Yamada (Chairman of the United States Aikido Federation), K. Chiba, M. Kanai, S. Sugano, M. Saito, N. Tamura, and Christian Tissier from France, to name just a few, as well as O Sensei's grandson, Moriteru, the current Aikido Doshu (meaning "Leader of the Way") and many of the most talented Aikido instructors here in the U.S. and abroad.

Tim Vazquez is also the Founder of Defensive Tactics for Professionals ( www.DTPro.us ) and SMT Fitness ( www.SMTFit.com ).

Tim Vazquez, has been training for over 30 years in the martial arts and has over 20 years of law enforcement experience. Tim is retired as a State Investigator for the State of New Jersey.

Some of his extensive law enforcement expertise includes:

Former lead D.T. instructor for an accredited NJ State law enforcement training academy and author of the D.T. lesson plan currently in use.

Feel free to contact Tim via email at:  Tim@ACNJManasquan.com